Teaching of Gerta Ital : The Path 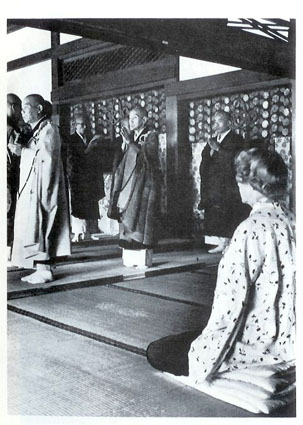 The Roshi lives in the One and It in him, and it is this wholeness and totality which gives him his unprejudiced vision in the face of the radical transformation of everything which we have ever known, and which makes it possible for him to accept the logical conclusions imposed by the situation and to put them into practice without prejudice or question.

It is thus hardly surprising that he did not impose any restrictions on the account of my life in his monastery which I planned to write And in any case, I have refrained from saying anything about the final solutions to the two major koans I describe in my narrative, ‘Mu’ and ‘One Hand’ (more commonly known in the West as ‘The Sound of One Hand Clapping’). I have only described the path which I myself travelled in order to attain the state of union with these koans, and that is something unrepeatable; the questions and answers in sanzen are always personal and individual, involving only the Master and the disciple sitting before him, and they are only relevant at the moment at which they are uttered. A Master will ask each disciple different questions at different times, and people who try to quote words which others have used to express their innermost being instead of speaking of their own individual experience are simply cheating themselves, and they will not be able to pull the wool over their Master’s eyes for very long.

The path which I travelled and which 1 have described in my narrative was a very hard and stony one This fact should not discourage anyone else, however for each individual is different. Nowadays it is no longer necessary for anybody who wishes to experience their own being and God within that being to take a roundabout route, nor is it necessary to change one’s religion. 1 never abandoned the religion which I was brought up in—in all the time I was in Japan nobody so much as hinted that anything like that was either necessary or desirable A true Roshi, a true Master, lives in a state of union with the Original One, and in that dimension there is simply no such thing as ‘one way to redemption’ and all dogmas are completely irrelevant. All that exists on that plane is Truth itself as living Being, and a Master’s only interest is to awaken that Being within his disciples.

This path is available to everyone without exception, no matter what their religion. The only requirement is that each individual must travel the path themselves, for it is not something ready-made which can be handed out on a platter.

In what I have written about my own beginnings on the path I have tried to give as much help as 1 can, showing how one can deal with the many difficulties which one encounters on the way, and how it is possible to practise on one’s own at home, without travelling to Japan. I should like to point out, however that all attempts to ‘conquer’ this goal are doomed to failure right from the start. It is a path which must be travelled without any objectives in mind. It is important to drop any ideas of success or failure or of the magnitude of one’s achievement’ I should like to take this opportunity to quote Father Enomiya-Lassalle SJ. once again:

‘Enlightenment is something which is available to everyone All one needs to do is follow the right path. Enlightenment itself is neither Buddhist nor Christian. It does not belong to any particular religion. It can be found in both Mohammedanism and Christianity, although it is not striven for so methodically and specifically in these traditions as in the disciplines of Zen and Yoga. Theoretically speaking, the association with a specific religion is secondary, even though it is very unlikely that anyone without a religious motivation or the aspiration to realize the Absolute would ever subject themselves to all the trials, difficulties and radical renunciation which travelling on this path involves’.

Father Lassalle who is a great servant of the Truth, makes it very clear that Truth, of which enlightenment is an integral part, is something which is available to everyone But one should not succumb to the temptation to ignore what Lassalle says about the difficulties encountered on the path and the renunciation demanded of the seeker Even so, the degree of this renunciation always depends upon the stage of development of the individual, and in practice even the most total renunciation is usually made up of a series of many small decisions which are taken individually one after the other until one’s state of renunciation is complete. For those readers who still feel that this is too much for them and that it is all very frightening I should like to quote something which Eugen Herrigel once said, both as consolation and as encouragement: ‘Even to travel a very short distance on this path is enough, enough to make one’s entire life worthwhile’.

And this journey towards the Absolute is a never-ending process, even for the seeker who has already travelled a long distance and experienced much. One must prove oneself again and again, both in the tests and trials of one’s everyday life and on the path of enlightenment itself. All the great Masters have spent their lives travelling from one realization of enlightenment to the next, for nothing which one attains is static—it must be deepened, understood, and experienced in its entirety, both as an undivided whole and as endless variety.

Source : The Master, the monks and I 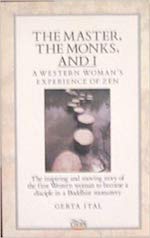 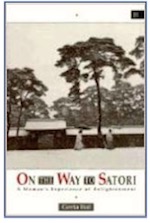