The final Awakening of Acarya Mun 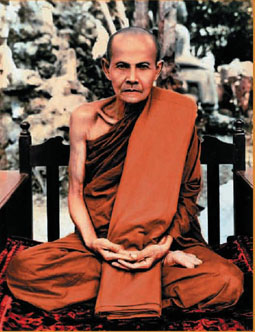 Ãcariya Mun investigated thoroughly, internally and externally. His mindfulness and wisdom penetrated all around – constantly moving in and out, up and down – all the while resolving issues, detaching himself, and then letting go as he cut, slashed, and pulverized every manner of falsehood with all the strength he could muster.

Feeling unbound as a giant fish swimming happily in the ocean, he looked back on his entire past and saw only dark obstructive times lurking there, fraught with all kinds of dangerous, inevitable consequences. His heart beat faster at the prospect of finding a way to save himself.

Looking to the future, he saw before him only a majestic, empty expanse of brilliant illumination – a view that completely surpasses any conventional understanding and is utterly beyond all description. So much so, that I find it difficult to elaborate any further for the benefit of the reader. I sincerely regret that I am unable to do justice to all the inspiring things Ãcariya Mun said.

Ãcariya Mun sat in meditation late that night, not too long after supreme-mindfulness and supreme-wisdom had reached the peak of their performance. Like a Wheel of Dhamma, they moved in unison as they rotated non-stop around the citta and everything related to it. He was residing at the base of a mountain, in a broad, open area covered with enormous flat rocks. Clear, open space surrounded him as he sat at the foot of a solitary tree – the only tree in that entire area. This tree had abundant cool shade during the day, so he sometimes went to meditate under it.

At dusk Ãcariya Mun began walking meditation, focusing on paticcasamuppãda, as the theme of primary relevance to this level of contemplation. Starting with avijjã paccaya sankhãra, he became so intrigued by the subject of ‘dependent origination’ that he was soon investigating it to the exclusion of all else. By the time he sat down at about nine o’clock, his mind was concentrated solely on scrutinizing avijjã, examining each of the interdependent conditions through to the logical conclusion, then reversing the order to arrive back at avijjã. Contemplating thus, he deliberated back and forth, over and over – inside the citta – the focal point where birth, death, and kilesas converge with the principal cause – avijjã.

Seated in meditation late that night, the crucial moment had arrived. The battle lines were drawn: supreme-mindfulness and supreme-wisdom – the razor sharp weapons – against avijjã, an enemy especially adroit at repulsing their advances then counterattacking, leaving its opponents in total disarray.

Since time immemorial no one has dared to challenge its might, allowing avijjã to reign supreme and unopposed over the ‘kingdom of birth and death’ inside the hearts of all living beings.

But at three a.m. that night when Ãcariya Mun launched his final, all out assault, the result was the total destruction of the king’s mighty throne and the complete overthrow of his reign in the kingdom of birth and death. Suddenly impotent and deprived of room to maneuver, the king could not maintain his sovereignty. At that moment avijjã perished, victim to a lightning strike of magnificent brilliance.

Ãcariya Mun described how that fateful moment was accompanied by a tremor that appeared to shake the entire universe.

He spent the rest of that night tirelessly paying homage to the supreme virtues of the Lord Buddha. Ãcariya Mun had always been compassionate – he was deeply sympathetic to the spiritual state of fellow human beings. But his citta had just attained a clarity that was so extraordinary in its brilliance and purity that he felt he could not possibly explain the true nature of this Dhamma to others.

from his biography written by Ajahn Maha Buha Nanasampanno