The Awakening of Madame Guyon

After her second child, when Jeanne was nineteen, an encounter would be decisive for her inner life. A monk she consulted about her difficulties praying silently told her, “It is, Madam, because you seek without what you have within. Accustom yourself to seek God in your heart, and you will there find Him.”

“[These words] were to me like the stroke of a dart, which penetrated through my heart […] These words brought into my heart what I had been seeking so many years […] I was suddenly so altered that I was hardly to be known either by myself or others. […]From that moment, my inner prayer was devoid of all form, images, or aspects; nothing of my silent prayer came from the head, rather it was a silent prayer of rejoicing and possession in the will, wherein the taste of God was so great, so pure, unblended and uninterrupted that it drew and absorbed the power of my soul into a profound recollection without act or discourse.”

To come to the definitive death of the “self,” the Christian mystic must rid her/himself of all dogma, of all images, and even of dialogue with the Great Other that is external to her/him, so as to leave space within for a unified, non-dual state in which she/he becomes the Divine. John of the Cross called this process “the dark night.” Madame Guyon described the stages of this slow inner death:

“Thy conduct, o my God, before thou madest me enter into the state of death, was a conduct of dying life: sometimes Thou concealed Thyself and left me to myself, in a hundred weaknesses, sometimes Thou showed Thyself with more charms and love. The more nearly my soul approached the state of death, the more its abandonments became long and tiresome and its weaknesses great; the pleasures were also more brief, but more pure, until, finally my soul fell into total privation.”

“Nothing was left to me of Thee, o my God, only the pain of Thy loss, which seemed real. I lost that pain to enter into the coldness of death. […] Nothing was given me to comfort me, for silent prayer was a torment to me. I could read nothing at all. […] What was terrible is that I felt this state must last eternally.”

“It seemed to me that I was, o my God, forever effaced from Thy heart and from that of all creatures. Little by little, my state ceased to trouble me. I became even insensible to it. My coldness seemed to me the coldness of death. It was indeed so, o my God, for Thou madest me pass lovingly into Thee.”

All through those years of disappropriation, she was convinced that she “[had fallen] from the grace of God; that [she] had requited His favors with the blackest ingratitude […] and far from having advanced towards God, [she] was become entirely alienated from Him.” Everyone seemed more advanced than she; she felt she had been damned. That inner desolation would suddenly give way to a state of “perfect life,” when she was thirty-two:

“On that happy Magdalene’s day, my soul was perfectly delivered from all its pain. What I possessed was so simple, so immense, that I cannot express it […]. In losing all the gifts, with all their supports, I found the Giver. In losing the sense and perception of Thee in myself, I found Thee, o my God, to lose Thee no more in Thyself, in Thy own immutability. […] These dispositions that I describe as though they were in a time past, so as to confuse nothing, have still subsisted and still grown stronger, and more perfect even to this hour.”

She passed from a state of recollection, where God was in her, to a state of union, beyond the mind, where she had passed into God:

“Before, it was as though God were enclosed within me and I was united with Him in my inmost soul, but afterwards it was as though I were absorbed into the sea itself […]. My mind is surprisingly clear. Sometimes I was surprised to find that there appeared not one thought. The imagination, formerly so restless, now no more troubles me. I have no more perplexity or uneasiness, nor am I occupied with memories. All is stark and clear, and God makes my soul know and think what pleases Him, and there are no more strange images to trouble my mind.”

“My inner prayer was in an openness and singleness inconceivable, yet, at the same time, of inexplicable depth. I allowed myself to be led from moment to moment by daily providence, without thinking of tomorrow. My soul was in a state of abandonment so perfect, within as much as without, that it could neither judge nor measure any thing. It was indifferent to being one way or another, in the company of one or another, in inner prayer or in conversation.”

Source: Journeys in Lands of Awakening and Sainthood 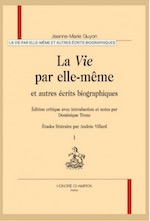 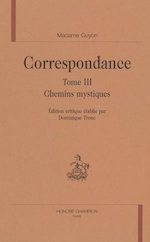