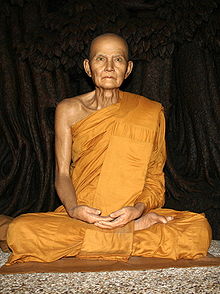 Ajahn Mun was born on Thursday, January 20, 1870, in a farming village named Baan Kham Bong, Ubon Ratchathani Province of northeastern Thailand (Isan) where the Mun River flows into the Mekong River, as the Mekong turns east and flows into Laos. He was born into a Lao-speaking family. He was the eldest of nine children: eight boys and one girl.

Mun was first ordained as a novice monk at age 16. As a youth, he studied Buddhist teachings, history and folk legends in Khom, Khmer and Tham texts stored in the monastery library. He remained a novice for two years, until 1888, when it was necessary for him to leave the monastery, at his father’s request.
He was fully ordained as a monk at age 22, on June 12, 1893, at Wat Liap monastery in the provincial city of Ubon Ratchatani. Mun was given the Buddhist name “Bhuridatta” (meaning “blessed with wisdom”) at his ordination.

After his ordination in 1893, Mun went to practice meditation with Ajahn Sao of Wat Liap in Ubon, where he learned to practice the monastic traditions of Laos. Ajahn Sao taught Mun a meditation method to calm the mind, the mental repetition of the word, “Buddho.” Ajahn Sao often took Ajahn Mun wandering and camping in the dense forests along the Mekong River, where they would practice meditation together. This is known as “thudong” in Thai, a name derived from the term “dhutanga “, which describes a number of specialized ascetic practices. One of the first long distance thudong was a pilgrimage to Wat Aranyawaksi in Thabor district. At the time, Wat Aranyawaksi was a ruin, an abandoned, overgrown temple in the jungle. Ajahn Mun spent a year in the teak  forest around the temple at this early part of his monastic life.

In 1899, Ajahn Mun was re-ordained in the Thammayut Nikaya, a reformed Thai sect which emphasized monastic disciple and scripture study. Having practiced under the guidance of his teacher for several years, and with his teachers blessings, Ajahn Mun went out on his own to search for advanced meditation teachers. During the next several years, he wandered extensively throughout Laos, Thailand and Burma , practicing meditation in secluded forests, but he never found the teacher he sought.
Gradually he realized that he would have to follow the Buddha’s example and “take the wilderness itself as his teacher.”

In 1913, Ajahn Mun stayed in Sarika Cave at Great Mountain. It was during this time, at age 43, when he attained anagami, according to the biography written by his disciple Luang Ta Maha Bua. He spent the next two or three years living at this location in the Khao Yai Mountains. He struggled with a mortal life-threatening illness during these years.

Ajahn Mun was increasingly recognized as a highly gifted teacher during these years, and attracted growing numbers of disciples among both monks and laypeople. In 1926 he was accompanied by a group of 70 monks in a “thudong” south to Daeng Kokchang Village, Tha Uthen District.
He became increasingly concerned by the encroachments of modern ways that threatened the traditional monastic customs he had been trained in. He began to think of leaving his homeland in order to seek more remote regions beyond the reach of modernizing influences of Bangkok authorities.

In 1927, Ajahn Mun was in Ubon, teaching monks and laypeople in Wat Suthat, Wat Liap, and Wat Burapha. He made arrangements for his aging mother, and then took leave of his family to go wandering into the direction of the Central Plains region of Thailand, not certain of his destination. He wandered by stages across the barren lands and sparsely populated lands of central Isan, sleeping under the occasional shade tree, receiving alms food from the poor rice farmers along the way.

He was acting abbot of Wat Chedi Luang in Chiang Mai during 1929, appointed under the direction of Bangkok authorities. When his superior, Phra Upali died this year, Ajahn Mun fled his temple without notifying either his dependent monks or the monastic authorities in Bangkok.

The following years, he established a meditation retreat on the eastern slope of Chiang Dao Mountain, and frequently spent time meditating in the sacred, remote Chiang Dao caves.
From 1932-1938, Ajahn Mun practiced meditation in a variety of locations throughout the forests and mountains, in solitude with little contact with people. These years of solitary retreat into the rugged, inaccessible wilderness are very significant in the biography of Ajahn Mun. According to his disciples, he is said to have attained enlightenment or “become an Arahant” during his time in retreat here among the hill tribes, in mountains that hold a unique position in the shamanistic traditions of Thailand.

At age 75, Ajahn Mun decided to settle permanently at his Pheu Pond Hermitage in the deep forest, at the head of the Phu Phan Mountains, near Sakhon Nakhon. Due to his failing strength, he was unable to wander into the forests. Ajahn Mun died in 1949 at Wat Suddhavasa in Sakhon Nakhon Province.
He attracted an enormous following of students and, together with his teacher Ajahn Sao, founded one branch of the Thai Forest Tradition, currently practiced throughout Thailand and in several countries abroad.

Ajahan Mun’s mode of practice was solitary and strict. He followed the Vinaya (monastic discipline) faithfully, and also observed many of what are known as the 13 classic dhutanga (ascetic) practices, such as living off alms, wearing robes made of cast-off rags, dwelling in the forest and eating only one meal a day. Searching out secluded places in the wilds of Thailand and Laos, he avoided the responsibilities of settled monastic life and spent long hours of the day and night in meditation. In spite of his reclusive nature, he attracted a large following of students willing to endure the hardships of forest life in order to study with him. 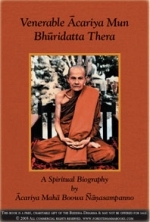