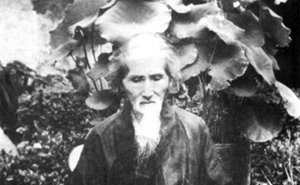 Master Xu Yun, who lived for one hundred and twenty years, passing away in 1959, mastered Zen – or Chan as it’s known in China – over many, many years, having superb disciples such as Master Xuan Hua. As with Master Hua, Master Xu Yun was renowned as a wonderful orator, explaining the Way of the Buddha in all its profundity with a wit and the common touch. An example of his ability to share the Buddhadharma with such humor and universal appeal was his teachings on Layman Pang and his daughter Ling Zao. And, as the following quote shows, he wasn’t averse to learning from the example of a layman if that layman was steeped in the Dharma – and layman Pang sure was steeped!

“Sometimes ordinary folks get the idea that the meaning of Chan is so profound that only men and women who’ve been ordained in the Dharma can possibly fathom it. But that’s just not so. Actually, we priests often feel that we’re in way over our heads. And every now and then, while we splash about, trying to look good treading water in our nice uniforms, along comes a civilian who zips by us, swimming like an Olympic champion. Such a civilian was Layman Pang. He would have won Chan’s gold medal. He’s been a hero not only to centuries worth of other laymen, but also, I confess, to every priest who’s ever studied his winning style.” (Master Xu Yun, ‘Empty Cloud’)

So, what was Layman Pang’s “winning style”?  Pang Yun (to give him his full name) was a master of ‘natural Zen’, applying the Way to every day life, whether in a monastery staying with monks, or living the life of a layman, with a wife and daughter. Indeed, his family was crucial to his own understanding of Zen, as the following incident shows. One day, Pang Yun expressed his frustration at trying to master Buddhist teachings, moaning how difficult it was to his wife. She retorted that in fact it was easy, for whilst her husband had been studying words, she had been studying the grass and the Buddha Nature that’s reflected in every dewdrop. Ling Zhao, their daughter, was passing by and remarked that they were just two old people foolishly chattering, to which her father asked what her experience was. She said: “It’s not difficult, and it’s not easy. When I’m hungry, I eat. When I’m tired, I sleep.”

This response, along with the quotation from Layman Pang himself at the top of this article, are two of the most pondered over statements in the history of Zen Buddhism, and yet they are from two members of the same family, neither of whom was a monastic! Master Yun’s readiness to learn from such worldly (and yet non-worldly) people is a sign of his own wisdom. And this wisdom was not solely expressed in the somewhat paradoxical language of Zen, for Master Yun could also explain the Dharma – the way things are – in more traditional Buddhist style:

“Fundamentally, our four elements are void and the five aggregates (skandhas) are non-existent. It is only because of (our) wrong thoughts which grasp (everything) that we like the illusion of the (impermanent) world and are thereby held in bondage. Consequently, we are unable to (perceive) the voidness of the four elements and (to realize) the non-existence of birth and death. However, if in a single thought, we can have an experience of that which is not born, there will be no need for those Dharma doors expounded by Shakyamuni Buddha.” (Master Xu Yun, ‘Discourses and Dharma Words’, p.53)

This experience of the unborn, a synonym for enlightenment in Buddhism, is what drove Layman Pang from his home to tour the Zen monasteries of China, seeking out the guidance of the masters that resided in them. He met many of the famous teachers of his time; famous in Zen circles to this day, such as Master Ma Zu, with whom he had some illuminating conversations. In fact, on their first meeting, the Master had a profound effect on the layman. Pang Yun asked where he could find a man who was unattached to material things, to which Master Ma Zu replied, “I’ll tell you when you’ve swallowed West  River in one gulp.” Master Xu Yun saw this as the decisive moment in Layman Pang’s cultivation of the Way:

In grasping that one remark, Pang was able to complete his enlightenment. He saw that Uncritical Mind was not enough. His mind had to become as immense as Buddha Mind; it had to encompass all Samsara and Nirvana, to expand to Infinity’s Void. Such a mind could swallow the Pacific.” (Master Xu Yun ‘Empty Cloud’)

Layman Pang stayed with Master Ma Zu for some time, until he realized he had no more to learn from him. It all sounds so immediate, so easy, doesn’t it? That we all had the abilities of Layman Pang! So why is it that we don’t latch on to the unborn more readily? Master Yun has made the following observation:

“It is only because of our insatiable desires since the time without beginning that we now drift about in the sea of mortality, within which there are 84,000 passions and all sorts of habits that we cannot wipe out. (In consequence), we are unable to attain the truth and to be like Buddhas and Bodhisattvas who are permanently enlightened and are free from delusion.”
(Master Xu Yun, ‘Discourses and Dharma Words’, p.67)

Pang Yun and his daughter Ling Zhao grew old together, traveling around China, becoming legends of Zen Buddhism. Their last abode was a cave in a mountain. Layman Pang knew it was time for him to die, so he sat on the rock which he used for meditation and prepared to pass away as the midday sun would pass overhead. Ling Zhao, however came into the cave and told her father to go outside and look at the eclipse of the Sun that was occurring. He went out to look at this extraordinary event, but saw no such thing, just the passing of midday. Returning to the cave, he found his daughter dead, sitting upright on the rock, to which he said, Oh that girl! She was always ahead of me.” Layman Pang did pass away himself one week later. The last words of Layman Pang are contained in the following poem, which is a perfect summing up of both his and Master Xu Yun’s teachings to finish with: 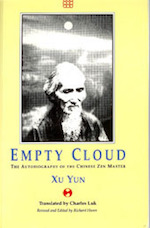