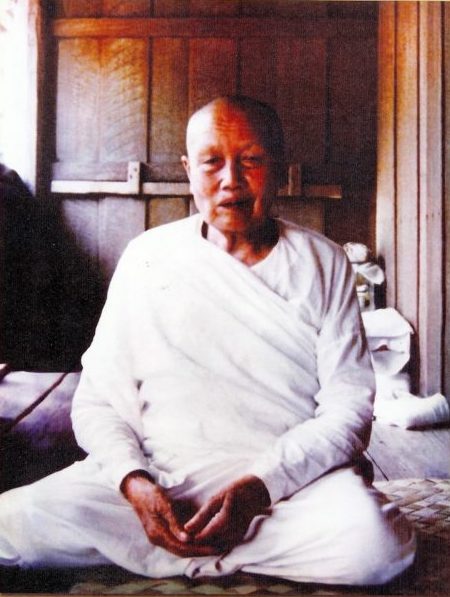 Mae chee Kaew was born in 1901 into a devout family in Baan Huay Sai, in northeastern Thailand. She was the youngest of a family of five, steeped in Buddhist tradition. Her mother died when she was five years old. At the age of seven, Mae Chee Kaew had already experimented with unusual psychic communication skills with invisible beings – celestial deities, nagas, animals and hungry ghost of Buddhist cosmology. She was often invited to visit them in the different heavenly and infernal kingdoms. She could even see the past lives of these beings. Her father discouraged her from talking about these phenomena.

According to tradition, she offered daily food to the wandering monks who lived exclusively on alms, so she got in touch with Ajahn Mun, the great master of the forest tradition, in 1917, when he came to stay near his village. He found that she possessed extraordinary psychic abilities and great spiritual potential. He gave her instructions for meditation. Even as a beginner, her mind was deeply absorbed for many hours. Ajahn Mun, himself an arahant and endowed with psychic powers, was able to realize that she sometimes knew visions and other psychic phenomena in her meditation.

Although she was only 16, Ajahn Mun told her that he accepted her as a disciple because he saw her potential to reach the ultimate goal of arahant. He asked her to become a renunciant (maechi or mae chee who was the status of the nuns in Thailand at that time), but her father did not give his consent. Ajahn Mun then advised her to stop meditating, because without a qualified teacher to guide her, the amazing abilities of her mind could have caused her more problems than realization. He asked her to wait for another master.

At the age of 17, she was compelled to marry. She did not have a happy marriage as her husband became unfaithful to her. Unable to have children, they adopted a daughter from a relative.

Always eager to devote herself to the life of a renunciate, she eventually obtained her husband’s permission to participate in a three-month meditation retreat. After tasting this life, Maechee Kaew decided to continue her life-long journey to enlightenment. At the age of 37, after 20 years of marriage, her husband consented to a divorce after she agreed to relinquish all her property to him. She also arranged for the care of her daughter before she renounced.

After becoming a maechi (renunciate), Mae Chee Kaew practiced meditation with various bhikkhus and received a 20-acre plot for the construction of a practice site for her and a small group of nuns. She reconnected with Ajahn Mun but she was too attached to the psychic phenomena she experienced, he could not help her.

In 1951, she was already 50 years old, Ajahn Maha Boowa arrived in her village and became her teacher. Ajahn Maha Boowa, who had himself reached the status of arahant, also saw her potential for enlightenment, but he also saw her attachment to phenomena that prevented her from progressing. He advised her to turn her energy inward to study the nature of her mind and body.

When she experienced streams of light and a feeling of total emptiness, she confused this experience with Nirvana. Ajahn Bowa deterred her. She entered a long silent retreat. She practiced with diligence, taking very little sleep and on some days, went without food. She first identified the falsity of forms, then thought, and the steps of breaking down the self. She finally experienced a supreme radiance and investigated it until she reached the final goal.

Like the experience of the Buddha and Ajahn Maha Boowa after their attainment, Mae Chee Kaew recalled her past lives and reflected on the impossibility of teaching others on how to attain the same achievement. Yet quickly, she realised that if she could attain liberation, others could too.

Mae Chee Kaew had skills in predicting events, mind read and some healing abilities. During a drought season, she was able to lead her monastic community to hidden water sources which had come into her vision one day while meditating.

In 1977, she was diagnosed with pulmonary tuberculosis, diabetes and cancer but she survived till 1991. At her death, upon cremation, her bones turn into relics of different colours and in the shape of pearls and crystals. It was the final proof of her highest spiritual attainments, arahantship.

Mae Chee Kaew left a legacy to inspire the future generations. She had proven that attaining Arahantship was not impossible, for both women and men, even in modern times. So we should not underestimate the power of our spiritual potential and need to aspire and strive hard. 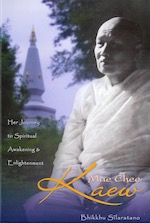